I’ve seen the movie before, but I don’t think the boys have ever seen it.  Noey (real name Noah, 7 yrs old) was especially into it, because this was ‘HIS story’.  The story of HIS name that he’s read about so many times and heard about in Sunday School.

But the one message that I missed after the first time seeing this movie was at the very end…Morgan Freeman took out his stick and wrote ‘A R K’ in the dirt, while saying ‘1 Act of Random Kindness’.

So it got me thinking – in the simplest possible terms – just as God showed his kindness to Noah and his family by telling him to build ark, we can show kindness to others by Acts of Random Kindness.  Your ‘act’ doesn’t have to cost money…it could…but it doesn’t have to.  Just do something for someone with no expectation of anything in return and hopefully that one act starts a chain reaction for others.  Could be as simple as giving up your seat on the train or bus, holding the door open for someone a little longer than you might have… 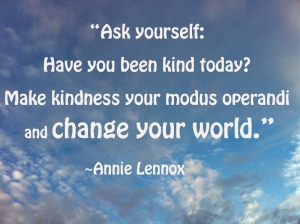 Got that? Get it? Good!  Now…go randomly act kind!

I’ll be trying too!

P.S. Let’s start tomorrow, cause I already missed my chance today.  I had an altercation with the pharmacist.  It seemed like the right thing to do at the time…he asked if Noah was a boy or a girl AND Noah was standing right there with me and he looks very much like a boy!  That was at like 9 am this am…I was late for work…the boys are STILL sick…blah blah blah.  But I really shouldn’t be making any excuses, in hindsight I should have reacted differently.  So from tomorrow?  Yeah?